I’ve been busy. Not only was I in Europe for some of the fall but life has been hectic since I returned. I’ll spare you the details but will tell you that, despite my last failed attempt to do so,  I decided to join an online dating site back in October. It quickly turned into a part time job. I could write about being in Europe and try to explain this selfie that I took while in Greece but trust me, online dating is mucho mucho more interesting. 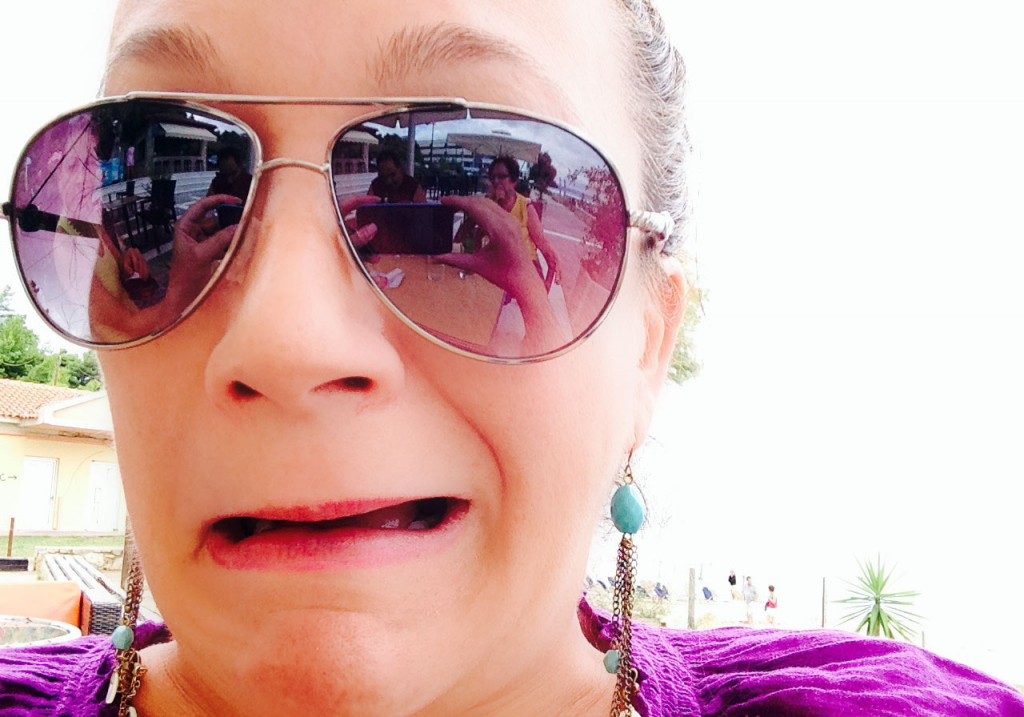 Here is how it started. Late one night during a Netflix binge I watched the Elaine Stritch documentary, “Shoot Me.” I loved Elaine Stritch on 30 Rock and wanted to know more about her life. I enjoyed the documentary but was struck by the fact that she was basically alone. As an older lady that was still performing, her musical accompanist was sort of her main caregiver. She was sick with diabetes and fighting alcoholism. To the public she was seen as a very funny & direct lady, and she was, but she was also pretty scared about dying and was alone. I felt a little sad for her.

Because I am not a rock you guys or a muppet as the above photo might allude to.

I don’t ever really feel lonely. My life is so full of people and shows and things to do and places to go and work to do. When I do have down time I relish it. I love that it is just me, myself and I. Y’all, I have to admit it. I am sort of having a mad torrid love affair with myself at the moment, and I don’t just mean with my Lelo (go ahead, google it.)

Now, clear your history before something happens to you and, even though you were wearing clean underwear when it happened, the last thing that they see you searched for was a Lelo.

I started thinking about what will happen when I am older and still performing . I decide I need to cast a bigger net into the dating pool and see what comes up. That night, I set up an OkCupid profile.

I don’t tell you that because I am like, I don’t know, proudly tooting some arrogance horn. Look at me I’m SO POPULAR. Pffffffft. Trust me, I think it happens to all women on dating sites. It is like a deluge of “OH MY GOD SOMEONE NEW TO LOOK AT AND EMAIL!” and trust me the messages in my inbox were almost all nothing but a deluge of crap. This isn’t to say that it isn’t flattering to be noticed or nice that someone took the time to write to me, but some of the messages make me want to enroll these guys in a basic grammar class or on the VH1 dating show, “The Pickup Artist”

To give you an idea. This is how the message looks in your email.  You can’t see a photo or any other information about the person so you have to click through to see more.

Ok. You’ve got my attention, although probably not for the reason you’d like. Who writes a message like this? Who exactly? What does this person look like? Of course I have to “read more” so, I click. 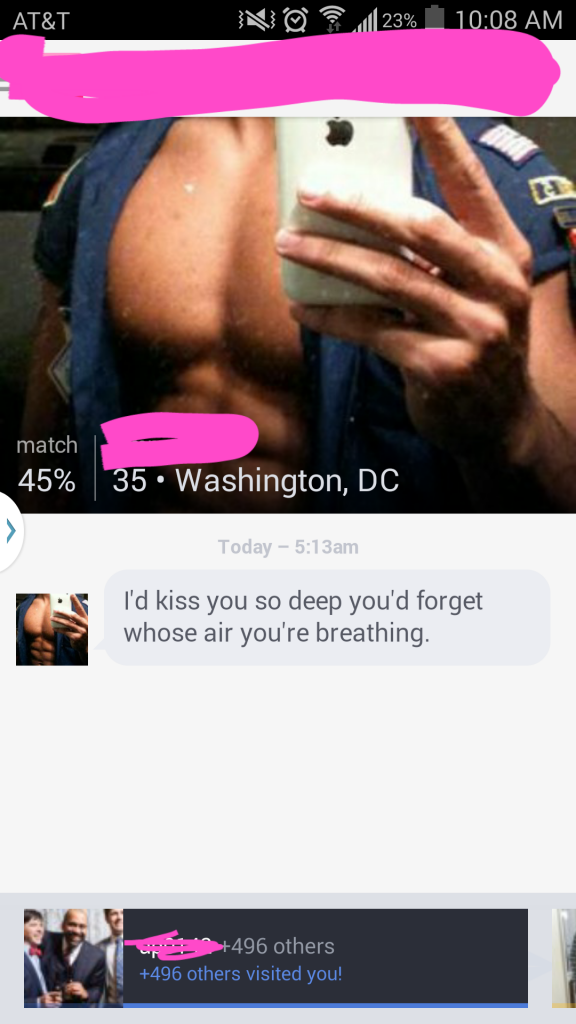 Is it wrong that my first impression is that he needs to clean his bathroom mirror? Also, oh man, that “read more” was a total lie. There ISN’T any more to read. I even clicked on his profile, only to see it almost completely devoid of information. I guess he is too busy sucking up the worlds oxygen to complete his profile. Drat. Ok, well, on to the next message. This time I log in from my laptop.

I was very tempted to write back some long, drawn out, uber personal story about my ovaries, ovulation & menstrual cycle. I even considered having my friend Aaron write it, because he writes about matters of the heart so well, but decided against it. I mean, don’t ask such personal questions if you aren’t looking for a personal reply. AMIRIGHT???

Now I get English isn’t everyone’s first language. I am pretty patient with that sort of thing. In fact I often am MORE attracted to men with accents that speak other languages. In this case, I stopped myself from writing back but I will admit I was curious to find out just what amazing I have.

My favorite messages are the ones from married men. I had no idea this was a thing on online sites but it is :: married men. Some are outright and honest about it. Others try to hide it but it is usually pretty easy to sniff out.  You can tell that they are married straight away b/c there is no profile picture or if there is one it is headless. (Smart guy, very smart! No one will ever find you out! There aren’t over a million people on this site and you probably aren’t meeting face to face with people and DC isn’t so small, right?) Also, they want to meet during the day or some other weird, specific detail, is given in their message.

Dig a little into his profile and here it is, all I have ever wanted, my sexual needs fulfilled by a tall and handsome married man. 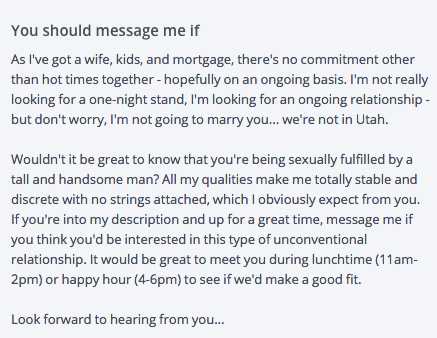 I get it. Some people are looking for exactly this sort of arrangement. More power to you. I guess I can’t blame a guy for trying and I am pretty certain he will find exactly what he is looking for. I am just not that girl. I want all of my sexual needs fulfilled by an  unmarried, totally available kind of dude, or *ahem* my Lelo for now.

There are so many bad messages I could share with you. Like the guy that messaged me and then a few weeks later messaged my friend the exact same identical message. She responded to him and let him know he did that and he let her know he has 6 stock messages that he uses when initiating a conversation with a woman and this one got him the most responses. He has it down to a science. Forget taking the time to write a personal note based off of what you read on someone’s profile. Let’s alternate between 6 stock messages and send them to all the women in the city. He also mentioned that he was 23 or something like that in his message to me. He asked if that was too young for me. I was tempted to write back that he was actually too old for my taste. That I am a cradle robber not a grave digger and to look me up when he ages -20 years.

Then one day I get this email from OkCupid and my entire life changed. Ok, maybe not my entire life, but my okCupid life changed. The message inundation slowed down to something more manageable and the quality of matches/messages jumped 1 million notches. 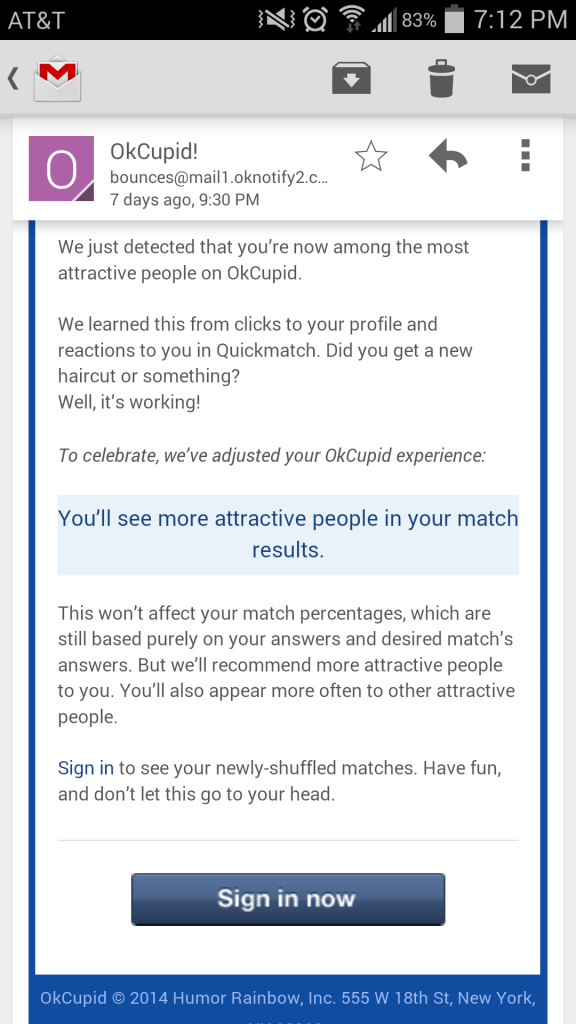 So now I am actually dating. Like dating-dating. Granted, OkCupid is a thick market and it requires a lot of weeding through to find the good eggs but they are there. I know this not only b/c I have met a couple of ’em but b/c I am a good egg and I am there. *pats self on back*  I am ENJOYING dating in a way that I haven’t before b/c I am meeting completely new people that I wouldn’t have an opportunity to meet otherwise. Also, it is just a blast :: even the bad messages.

Oh and look! He’s back again. He might very well be a nice guy, and not the man responsible for Darth Vaders pulmonary problems, but until he cleans his bathroom mirror. I can’t. I just can’t. 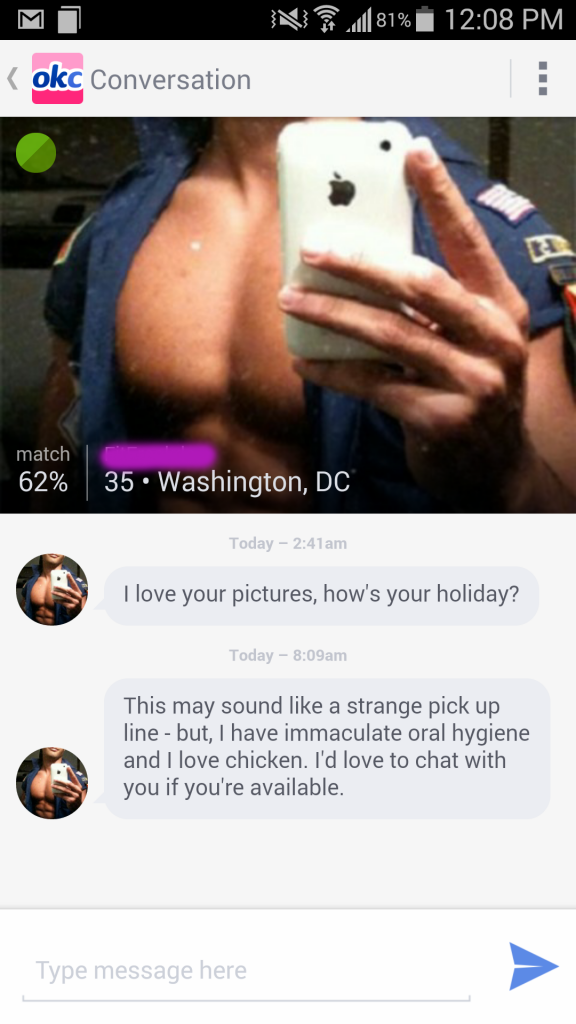 Edited to add: Here is my online dating profile picture. It is good, right?

7 Comments on Is this What Happened to Darth Vader :: Online Dating?

I die for your thoughts. A thousand times. Cancel reply

Ugh, a pop-up, so annoying right?
Please don't throw banana peels at me.

A sign up makes my heart swoon and I want you to be in the know when I publish new stories. Plus every time someone completes this form a couple falls in love*

I hate getting too many emails the same way I hate mushrooms (a lot) and pinky swear not to do that to you.
*not proven
Ugh, a pop-up, so annoying right?
Please don't throw banana peels at me.

A sign up makes my heart swoon and I want you to be in the know when I publish new stories. Plus every time someone completes this form a couple falls in love*

I hate getting too many emails the same way I hate mushrooms (a lot) and pinky swear not to do that to you.
*not proven
Loading Comments...